Welcome to Underground Fossils, brought to you by Dimxsk and Trylemma. The purpose of this blog is to assist in the sharing of out of print and/or rare examples of the hip hop genre. We believe that every release we post is an integral part of history and deserves to be heard by older fans as well as new seekers. We do not post or encourage the posting of anything that can be bought easily from the artist, those can be found elsewhere. Furthermore, if any artist who is featured here wishes not to share their material we will remove it immediately. Most of the rips found here were made by other people, but some of them were made by us. We are not sound engineers, so while the quality will usually be 320 kbps, they will be recorded from the source material as is. Please message us if you are an engineer and want wav files to master. Enjoy!
PS: We also want to thank all of the women and men before us who shared music in this way. Your work made our collections what they are today, and we are grateful. 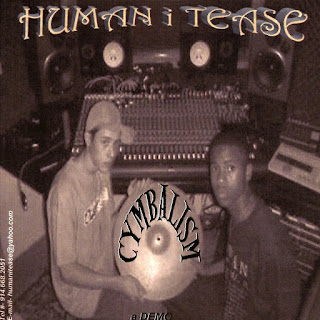 Happy Friday! For today I thought I'd share something on the more obscure side. Human i Tease is a demo containing the earliest recordings I know of from Troubadour, a rapper featured on the Farewell Archetypes compilation by Plague Language and ...of Proliteariots, as well as raps from collaborator Anu-1. I know nothing about him, but this album has made me curious.

Cymbalism finds the pair rapping over beats by Sixtoo, Controller 7, Mr. Dibbs etc. Apparently only 15 years old each (according to my source at THH via Discogs, corroborated by the youthful appearance of the two kids on the cover), Troubadour and Anu-1 are uncommonly skilled on the mic for their age and clearly enjoy and revere the art of rapping. Mostly erring on the side of experimental, this album should appeal to fans of early Sixtoo, early Buck 65, pre-trap era early Noah23, early Aesop Rock, early Josh Martinez, early Living Legends or just plain early.

A worthy fossil to add to any collection of weird forgotten indie rap. CDr is hand-made, I have no idea how rare this release actually is, but it's come up for sale only once. It won't set any records but it deserves to be heard.

We're doing something different this coming Wednesday, looking forward to sharing it with you. Stay tuned!
Posted by Dimxsk at 7:04 AM